A Capri On The Road

Be a Traveler. Wander Limitless. Be Mad. Explore and Inspire! 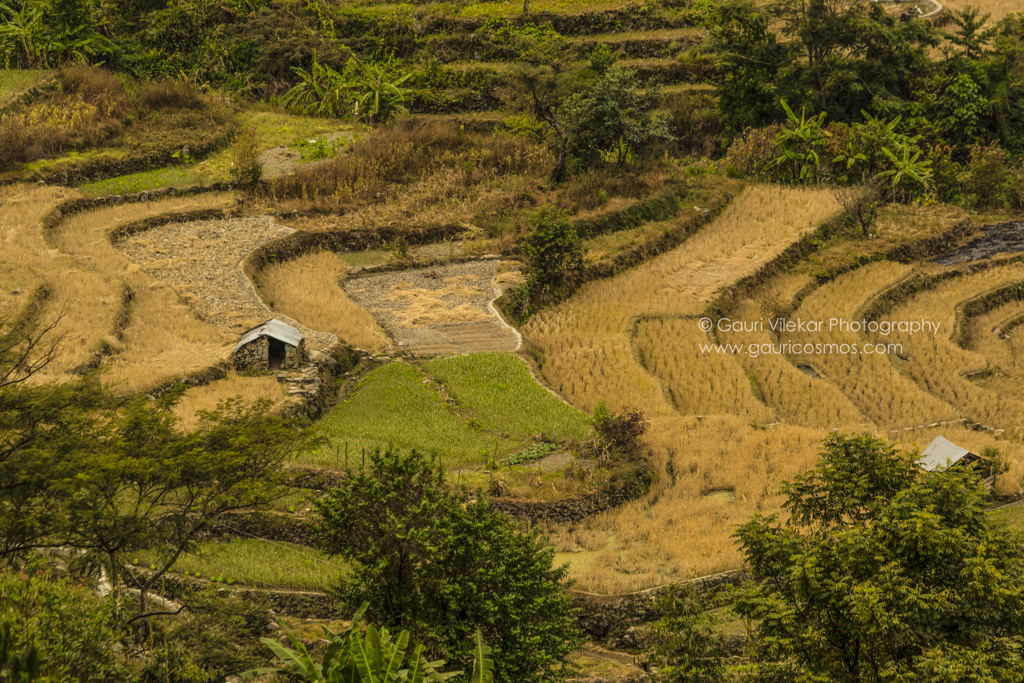 A cheerful and cuddly man, somewhere in his late 60’s, wearing a coat and muffler around his neck, greeted us with a pleasing smile and a warm handshake. Uncle Tsilie had been patiently waiting for us at the ticket counter of the Nature Conservation office located at the base of the village. We had traveled for two hours on mucky roads from Kohima in a cramped shared taxi. It was December and the weather of North-East, being predictably unpredictable; sprinkled rain out of nowhere! A serpentine road with alternate bends played hide and seek with us until, suddenly, a sleepy village named Khonoma, nestled in the rolling mountains of Nagaland made its first appearance.

Uncle Tsilie’s home stood on a mountain slope. We climbed up the 150-odd stone steps with our heavy backpacks, panting and sighing until we finally made it to the top. I was amazed to see his grit as he climbed ahead of us, without a gasp or break!  One section of the house was an elongated block comprising of four rooms in a row facing a common corridor. The kitchen stood independently with vibrant wild flowers lining up its base. Pomegranate and guava trees grew in the porch with other shrubs and grotons along the fence. The home overlooked a stretch of gargantuan mountains and incredibly stunning terrains.

The warm and hospitable couple- Uncle Tsilie Sakhrie and his wife 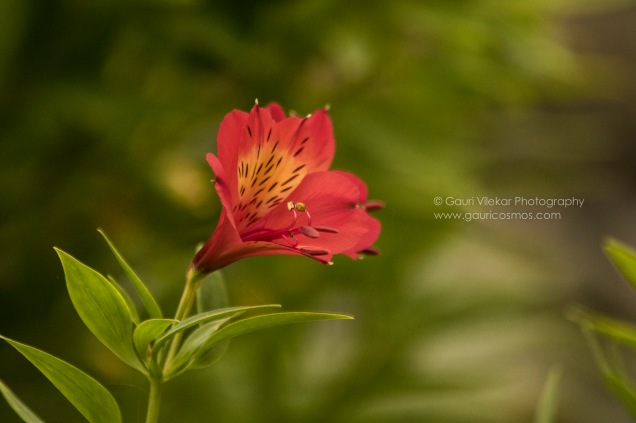 I met Mrs. Tsilie and the adorable kitten in the kitchen that was warm from the burning hearth. One of the rooms was converted into a library. Uncle Tsilie came across as a well-read man and his fetish for books was evident from his compilation. There were books on travel, mythology, history, wiki, astrology, encyclopaedia, science, fiction and more.  A few books gifted to him by the writers and researchers who stayed in his homestay during their work had pretty words of gratitude for the man. Some even had contribution from him on the research content. Uncle Tsilie has contributed immensely towards conservation of Khonoma for decades and has been instrumental in placing Khonoma on the map as Asia’s first green village.

With no specific agenda on our mind, we spent the entire evening on the couch in the library, sipping on some hot tea while flipping through random books. I stumbled upon a book that spoke about the historical past of Khonoma. It was the land of the brave Angami tribes who fought the British troops with all their might to safeguard their territory, resulting in wars and bloodshed. Many warriors from either sides lost their lives. After about 30 years, a truce happened and eventually Christianity became their main religion. I could now relate to the memorial I had seen at the entrance of the village that morning. British names were engraved on a huge grey stone pillar surrounded by burning candles and fresh flower wreaths.

Dinner prepared by Mrs. Tsilie was a visual and gustatory delight . Simple yet wholesome food of boiled rice, freshly plucked broccoli and potatoes, dal and crunchy salad, all of which had a generous garnish of coriander leaves was served. Post dinner, when we reached our room to retire, our beds were already arranged by her; backed with an unending supply of clean and cozy blankets! I slept with the blissful sound of the trickling raindrops in my ears.

Gulping our tea in a hurry next morning, we set out on our quest to spot a rare, vulnerable and endangered bird specie of the region- the Blyth’s Tragopan. Tragopans are a subset of Pheasants endemic to Himalayas, of which, the Blyth’s Tragopan is found only in Nagaland. These birds are extremely shy, hence spotting them is mostly, a matter of sheer luck. With the help of a local guide, we decided to trek to the Tragopan Sanctuary, tucked into the virgin forests of Khonoma. Climbing up a few hundred steps above our home-stay connected us to the main road. Adjacent to the road, on the top of a mountain, our guide pointed out to a barren patch that resembled the face of Hanuman and thus, the mountain was considered sacred by the villagers. I could hear hundreds of bird calls around me, however, could barely spot a handful due to the thick foliage.

A patch on the rock resembles the face of Hanuman 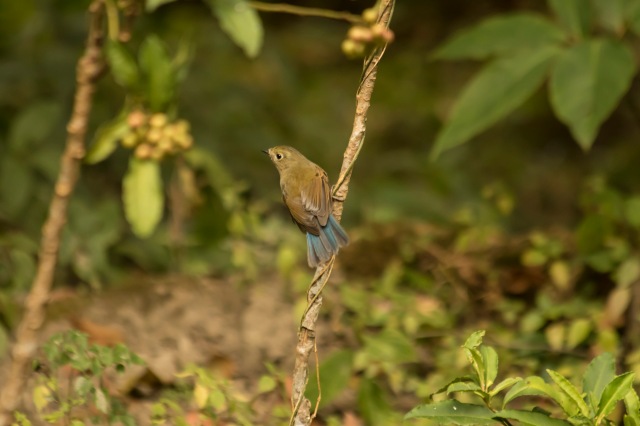 The unpaved road slithered between dense vegetation for almost two kilometres before disappearing into the woods. We trekked on gradual elevation, passing through abundant wild apple trees. Hundreds of small green apples, mostly half-eaten by the Mithuns (wild cows) were scattered all around; Their citric but sweet fragrance engulfed the forest along with the intoxicating scent of wild oranges and lemons. The damp soil was laced with brilliant flowers blooming in varied shapes and sizes. After about two hours into the jungle, we still did not have any luck on sighting the Blyth’s Tragopan. With the intermittent drizzle adding to the frustration, we finally retreated, hopelessly; like a troop that lost the battle. We stopped by a virgin brook that flowed serenely through the mossy rocks, looking incredibly mystical in the play of shadows and light. How could I stop myself from tasting its sweet and chilled waters? By the time we were out of the forests, I was convinced that with all the other birds that we heard and sighted, it wasn’t really a bad day after all!

A family of Mithuns (wild cows) enroute on the trek trail 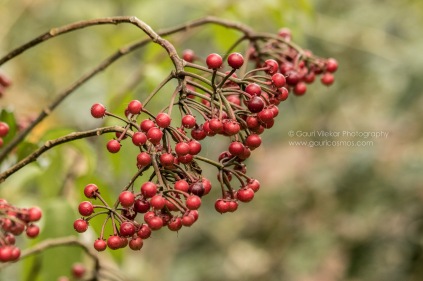 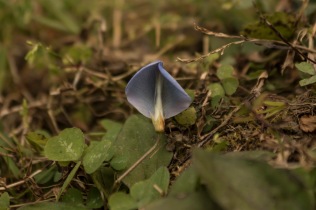 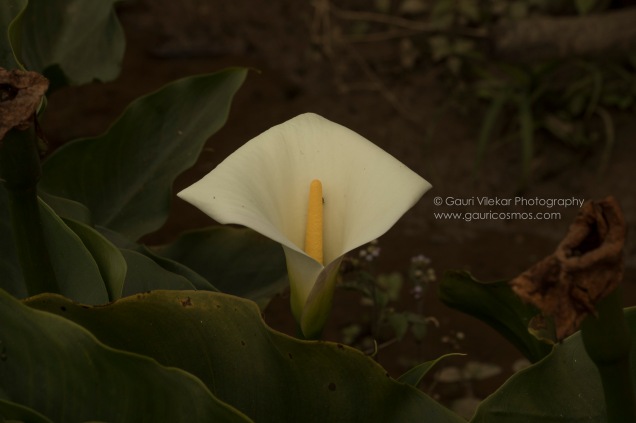 The valley that lay between the home-stay and the mountains encompassed a massive expanse of infinite and gorgeous step-fields starting at the elevated end and gradually receding all the way down to the base of the village. We strolled down to the main road and deviated onto a muddy trail that took us directly to the edge of the step-fields. Each patch of field was bordered with hard soil and stones with narrow canals running along their rims. With careful steps, we walked on the fringes, breathing in the fresh aroma of garlic and spinach mixed with the delicate scent of fruits and wildflowers. The joy of plucking a luscious ripe guava off the tree and biting into its sweet tenderness- free of chemicals and pesticides was indescribable.

Step fields start at the top of the valley and taper down to the base of Khonoma. 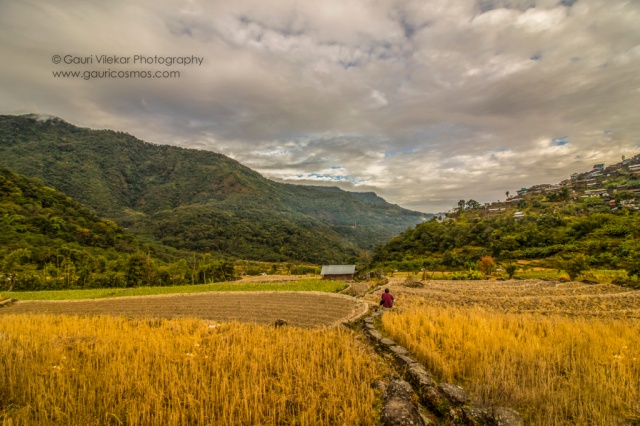 An abandoned Naga hut sitting next to a bare tree peeped hideously through the tall grass. A lofty mountain stood in the background with giant cotton balls stuck to its face. A small wooden over-bridge was built to cross over the canals. My shoes got drenched in  rain. By the time we reached the base, hundreds of tender, harmless arrows propelled by a local variety of weed held on to my pants so intractably that it became impossible to get rid of them! We rested under the canopy of a huge banyan tree before we made our way up through a steep climb that brought us back to the main road.

Exchanging hugs with Uncle Tsilie and his wife, we climbed down the 150 odd steps for the last time. It was an overcast Sunday morning. With houses shut and shops closed, the streets looked deserted except for the sound of the church bell, few burning candles and two souls with rucksacks heading on their way back home..

Khonoma is a small picturesque village, 20 kms away from Kohima and is Asia’s first green village. There is absolutely no tourism here, no fancy hotels and no restaurants.

Things to do : Trek to the Tragopan Sanctuary and Explore the brilliant bird life of the region.Wander aimlessly on the terrace fields and relish the organic fruits and vegetables. Relax in the library at Uncle Tsilie’s if you are  bookworm. Gain indepth insights to Khonoma- its history is rather interesting.

What to buy : Dried wild-apple bits